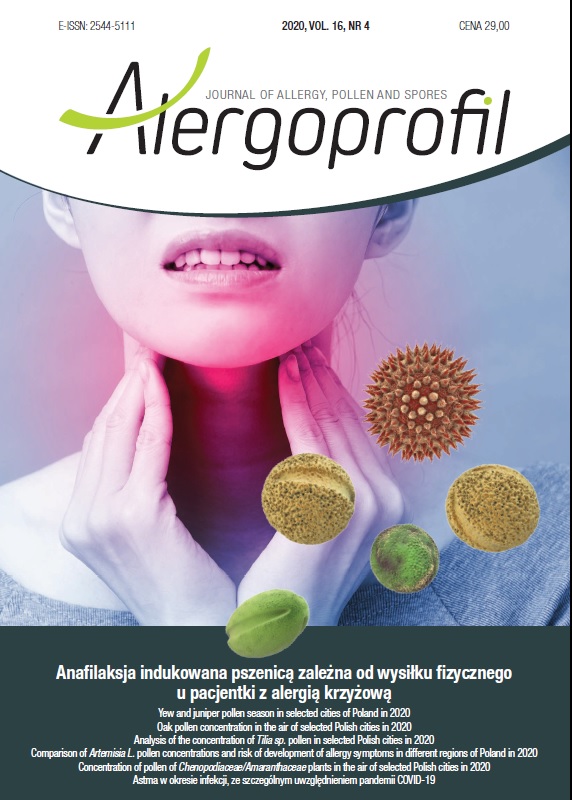 With their numerous natural and functional values, lime trees are recommended for planting in urban greenery. However, the allergenic properties of lime pollen should be taken into account. The aim of the study was to analyze the concentration of airborne lime pollen and the course of pollen seasons in this taxon in 10 cities in Poland in 2020. The aerobiological analyses were carried out in Bialystok, Bydgoszcz, Cracow, Lublin, Olsztyn, Opole, Piotrkow Trybunalski, Sosnowiec, Szczecin, and Warsaw.

The investigations were conducted with the volumetric method using Burkard or Lanzoni pollen samplers. The 98% method was employed to determine the length of the pollen season. The earliest onset of the lime pollen season was recorded in Opole and Warsaw (June 14th), and the latest date was noted in Sosnowiec (June 23rd). The maximum lime pollen concentrations were reported between July 1st and July 6th in most cities and on June 24th only in Lublin and Opole. The highest annual pollen sums were recorded in Lublin (738), similar to those reported in 2018 and 2019, whereas the lowest values were noted in Bialystok (20), Sosnowiec (145), and Olsztyn (149). The annual sums of lime pollen in the other measurement sites located in the different regions of Poland were in the range of 180–308.

In the discussion, the results from 2020 for Lublin are compared with data from the previous 19 years collected in this city. The data suggest that the increase in the airborne lime pollen concentration recorded in Lublin in recent years may be associated with climate change.